My Attempt at Modeling in Chemistry

For the past two years I’ve tried (and mostly failed) Modeling in Physics.  I didn’t take the class/workshop over the summer.  I was cheap and haven’t even become a member of the AMTA.  (I know, I know: I should do that.)  Finally, I came upon the awesome Kelly O’Shea and her awesome blog, in which she basically explains what she does, for some lessons word-for-word, on top of providing all of her packets of work, which is awesome.  Finally I feel like my students are learning Physics in this totally new, intuitive, cool way.  They’re solving problems by drawing graphs rather than crunching numbers. But I’ve lectured in Chemistry for the past 2 years cause I think I know what I’m talking about in that subject.  I’ve heard of modeling in Chemistry, but I haven’t had the time (to take the workshops) or money (to join the AMTA and get materials).  Now that I’m finally feeling a little good about it in Physics, I think I can picture how it should happen in Chemistry, and so one day I decided to try out what was in my head. These are Junior in Chemistry, and all we’ve done so far is background work: significant figures, scientific notation, SI units of measurement and conversions.

I left students with that information and they were required to come to their own conclusions.  Students started off terribly confused by what they should do, so I shuffled around the room and asked provocative questions: “How large are these so-called atoms?  Be specific!”, “What are those numbers on the board and why might they be important?”, and “What do you think about the chemical and physical properties of atoms?”  These questions led different groups to come up with different rules, while led to a good discussion, in which the class had to decide on 5 rules.  I was impressed that both classes ended on 5 points that were comparable to Dalton’s.

I asked them to make 3 columns again in groups of 4 with the following headers: “What we already knew (Dalton’s/the Class’s 5 rules)”, “What can we learn from the Cathode-Ray Tube Experiment” and “What our picture of the atom looks like now”.  After some very leading questions, groups moved in the right direction, and I made sure that at least one group in each class had an atom somewhat resembling the Plum-Pudding model before moving into the group discussion. The group discussions were a little better this time around, partly because they had done it once now and party because they had drawings to fall back on.  It was still kinda like pulling teeth, but both classes at least saw something like the Plum-Pudding model before either accepting or rejecting it. I followed up on this discussion by giving Thompson’s own model (the students really wanted to see it at this point!), which maybe I should not have done?  I want them to think that their own “Discoveries” are valuable, and those are undermined when I show them “the answer” (or what they perceive in their minds to be “the answer”).

This discussion occurred on a different day, and so I was a little more prepared, but it was still foreign and difficult for them.  I introduced the experiment and asked them to make a prediction, based on our previous model of the atom, sketching where they thought the alpha particles would land. After this prediction, I highlighted the following points of the experiment:

Again, with some pushed upon individual groups, students came to the conclusion that there must be a small, dense, positively charged center of the atom. We decided to randomly call it the “nucleus” and I even managed to convince some of them that it was reasonable to believe that the electrons are orbiting this nucleus. [2]

Things I liked about this activity and format:

Things I didn’t like, or need to improve on:

What are your thoughts on it all?  Help me out if you’ve ever done something like this or have other helpful ideas!

Here are some pictures of the students’ boards after part 2: Thompson’s Cathode-Ray Tube experiment, so you can see where the different groups took the information (with some heavy questioning and prompting on my part). 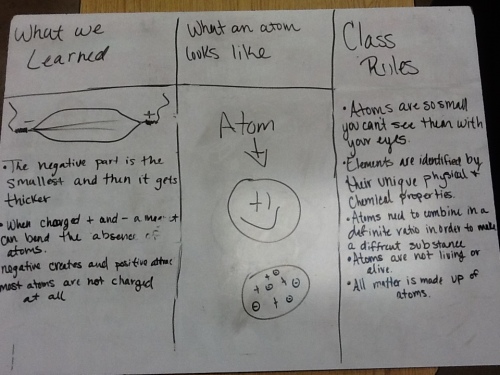 This group liked the smiley-face model of the atom. 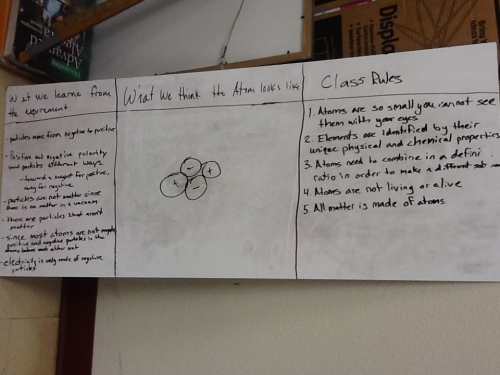 This group jumped to the conclusion that we knew what protons are a bit early. Because of that, I continually asked them “and how do you/we know THAT?”.

This group had fascinating theory that all mass is positively charged and electrons are mass-less particles. Definitely one of the more creative approaches to solve the problem.

4 responses to “My Attempt at Modeling in Chemistry”

This site uses Akismet to reduce spam. Learn how your comment data is processed.