I’ve been jumping into blended learning this year as a part of the FCPS Vanguard program and I’m leaning heavily into station rotations as a model for making my class “smaller”. This week I’ve turned my attention to my seating arrangement.

I must say that I appreciated one tweet a few years back with the caption “Seating doesn’t create a cooperative classroom, students do” and it had a picture of a classroom where the seats were in traditional rows, but the students were sitting in a group–some in seats, others on the floor. The students were clearly working in a group despite the seating arrangement and I admired that teacher for developing such a sense of group work in his/her students that I didn’t see the need for rearranging my desks that were also in rows (actually pairs, but essentially rows). I have been using VNPS. However, I have had the luxury of a teacher intern (student teacher) for the past three weeks and I’ve gotten a new perspective on my classroom and really want to try a new seating arrangement.

I moved the desks around and I’m now super excited for my students to arrive on Monday!

Yes, that’s a trombone and a music teacher in my math classroom

Cool panorama of how lame my seating was

Early this year I went with the color-coding to quickly assign students to stations and rotate them through the stations.

After attending a workshop by Catlin Tucker, I realized that I need to focus more on my teacher-led station being conducive to, well, being led by a teacher. So I changed one station.

And it helped the flow of my class and I started to like the teacher-led station more. Then I realized “hey, I could use the seating to help the blended learning”.

It’s amazing how much more space I have[1] and I like that the students are now already organized in groups. Before I had to put them into groups every time they got to the “groups” station, which took me away from the teacher-led station, which took time out of my class, which delayed their starting their work, etc.

Here are some pictures of my new classroom setup.

The brown table now is where students quickly pick up supplies and any papers based on their current station. The table was between me and the students at the front, but now there’s nothing in the way!

The teacher-led station is also around the projector rather than a random whiteboard, so I don’t have to go back to the 19th century[2] and draw all of the graphs by hand.

Another little addition around the room are a few “question walls” (sometimes called a “question parking lot”) for each station. This was suggested originally to me by my Vanguard Coach, Kent Wetzel, and later reinforced by Catlin Tucker’s workshop.

The idea is that I don’t want to divert my attention away from the teacher-led station (even if it’s student-centered, as I hope it most often is!). But I still need to do a “lap” to ensure students are focused and working around the room at the other stations. However, the danger is that students, who were perfectly independent a moment ago, suddenly become helpless and hopelessly stuck when a teacher walks by. But if I get bogged down in answering “proximity questions” as they’re called, I will never return to the teacher led station in a timely manner. So students write specific questions in that space and then I only address written questions on my lap around the room (which is done on my time, not at the insistence of a student). Students have other resources that they need to get better at using: their notes, their classmates, their brain.

[1] Yes, I shrunk the desks in the diagram, but there really is more space!

I know that I just cut up a bunch of big 2′ x 4′ whiteboards the other day (or rather, had Lowes cut them up for me), but I had a few extra and thought that maybe I’d like some of the hand-held variety.

I had looked into these before, but was discouraged when I saw this: 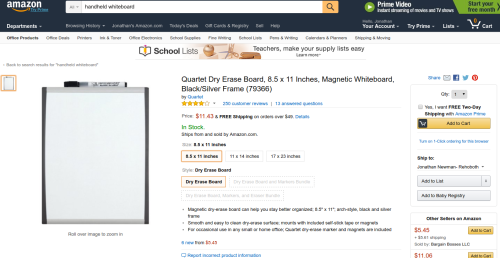 The large whiteboards at Lowes are <$15, even with having them cut it into quarters (my 2′ x 4′ rectangles). So you could buy a saw (mine was $30 at Lowes) and still not even get close to the price of buying these things online.

Looks jagged, but is fairly smooth. 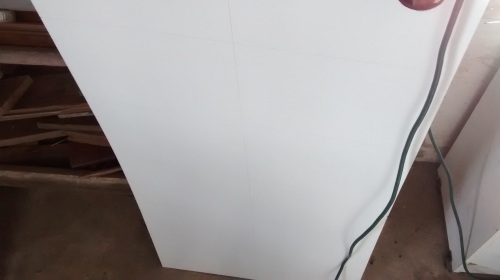 Made lines in pencil first.

Halfway through this board. It’s good to hold it for the second half so it doesn’t twist off and give a bad rip in the middle. Or put it on two tables of equal height. 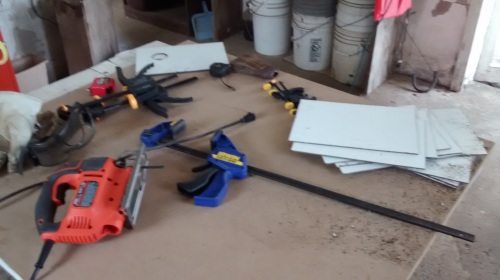 Some are cut; you see the clamps I used, as well as the jigsaw.

The entire set of 36! You see the large whiteboards in the background. And yes that bench says “math”–it’s my father-in-law’s. He was a MS math teacher for 26 years.

[1] I have 36, but I got drill-happy before, so two of the boards have large 2″ holes near the middle of the board.

New classroom, so I need somewhere to keep my papers. These things can be expensive!

So my new (mini) hobby is wood-working. And I just changed our license plates (don’t have to hand back NC or NM plates!), and my wife’s parents had a ton of old ones, so I thought I could make this for cheaper. 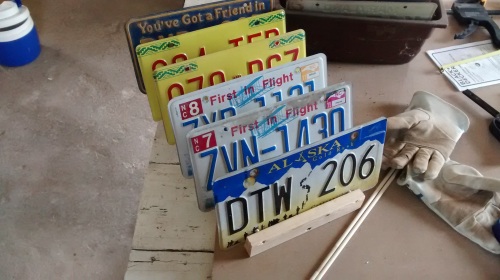 No glue, only two screws! 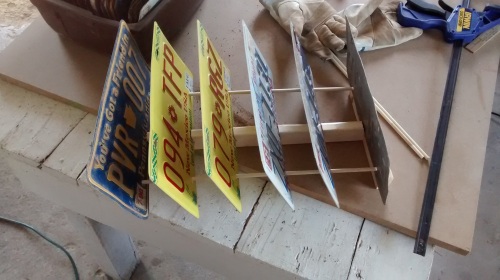 Hopefully they’re not spaced too far apart. May have some paper-curve issues. 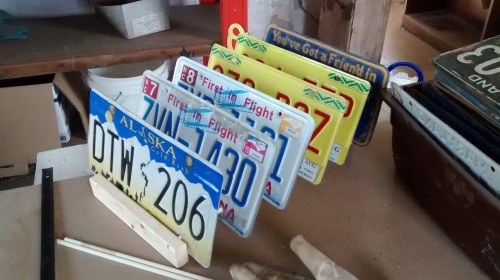 Alaska: not actually my plate, just found in Alaska when I was in HS. 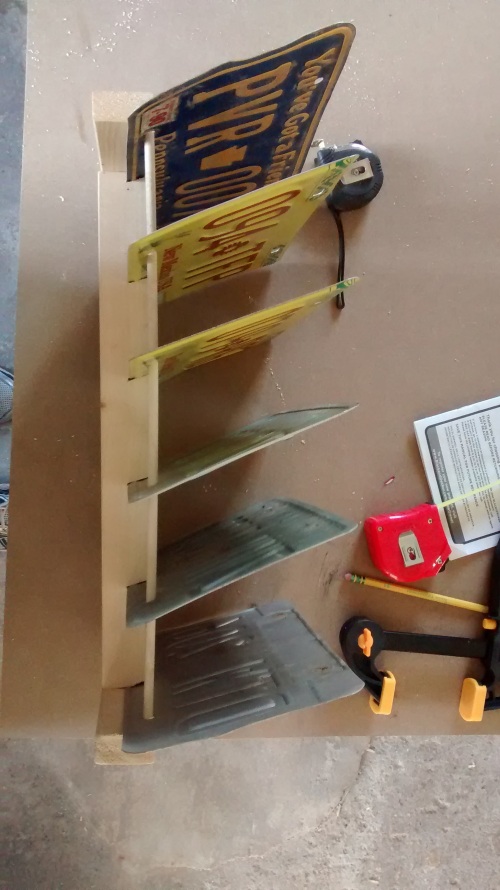 So you can see how it was put together. Just one cut in the wood at an angle!

I put this all together in about an hour. Let me know if you want more of an explanation of how it was put together. If I had to re-do it, I might leave less space between the plates, but I can always use folders to make sure the papers don’t curve at the bottom.

Last year I went out and bought 2′ x 3′ whiteboards and drilled holes in them so I could hang them around the walls.  It was an old school and so the principal gave me the go ahead to do whatever I wanted to the room’s walls. However, I shared the room and the tables weren’t moving anywhere (because of the other teacher(s) who liked it how it was), so I didn’t use the “vertical non-permanent surfaces” as much as I would have liked. Though I still used them plenty. But students got tired of hanging them on the wall, so they just worked on the whiteboards in groups around the room.

This year I have my own room. And I’m going to go crazy on the vertical whiteboard front. The 3 lb. command strips that I got last year didn’t last the entire year–several broke early on. This time, I’m going with the 5 lb. command strips (2 per board). But my boards are all in NM for the next teacher at my old school, so I went to Lowes to buy more.

Oh, and 2′ x 4′ hopefully will be nicer in one way: I don’t have to worry about finding the exact height for all the tall vs short students. If the boards are hung vertically, then there’s lots of up and down “wiggle room”. I just hope the 5 lb. strips will hold!

Did the hole drilling thing again (it worked well last year, until the command strips came down).

Brown = dust from after the drilling.

Measure them carefully so that the boards aren’t crooked when hung. 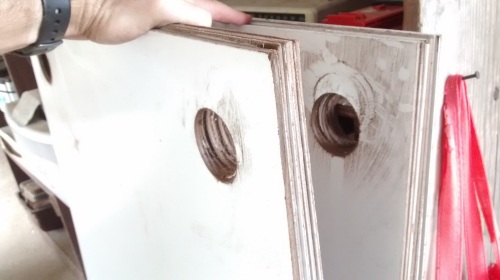 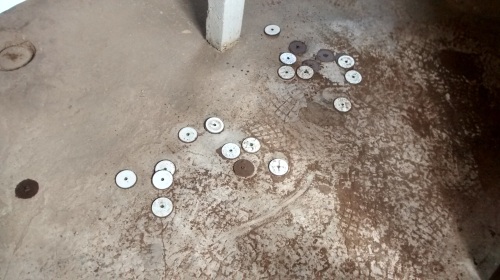 The leftover cutouts. Trying to think of a good way to use them. Statue-stands?

But if you do the math, I have 2 extra 2′ x 4′, so I think I’m going to use my new Jigsaw (Jig Saw?) to cut these down into personal whiteboards, in case there’s a day I’d like to do that kind of review. Might as well, right?