Each year that you repeat a good project, I find it just keeps getting better. By “good project”, I mean one that is open-ended enough for the students to be creative in their own way and yet concrete enough to bring it back to some good math.

Here’s a link to the final product of some of the top projects from this year (and previous years), so you can see how we connect it to math, and below are some of the fun videos they made. Enjoy!

End of the Ana Soler Project

So my students finished this project of hanging tennis balls from the ceiling in the shape of two intersecting, adjacent parabolas.  I had seen pictures of the project from an art blog, but once I saw the blog above, I knew that my students would enjoy the challenge.  I gave them very little guidance, and were proud of how accurate they were by the end.  Of course, these were Precalculus students modeling a parabola (which they have seen in how many classes now??), and I did have to show them a few Excel-esque tricks in the Geogebra spreadsheet, but they really enjoyed it.

They actually started off bickering more than I thought they would, and were painstakingly slow to take the initiative.  I had the “whole class” work together (8 students–by far my smallest class), and they didn’t have a single obvious leader.  Some students decided to go and try to work on their own, leaving others behind in the dark, while others became frustrated with one another.  I was surprised at how poorly they worked together when given little to no direction.

The tipping point was last Friday (we had already spent part of 4 or so classes on it) when I decided to give them an incentive of 100 participation points (a week’s worth of participation points!) only if they could finish the project in class before the bell.  The tone of the class instantly changed.  Everyone was engaged and working together.  They failed to finish it in time, however, I had one student ask to continue working by herself during her next class, which happened to be a study hall, and two boys even came after school to finish it on a Friday!

I want to blog more about the combination of external motivation (participation points) and internal motivation (it was a cool, fun project) which caused students to give up their Friday afternoon finishing a math project, but that’s a post for another time.  For now, I’ll just leave you with photos of them working on the project, along with the finished product. 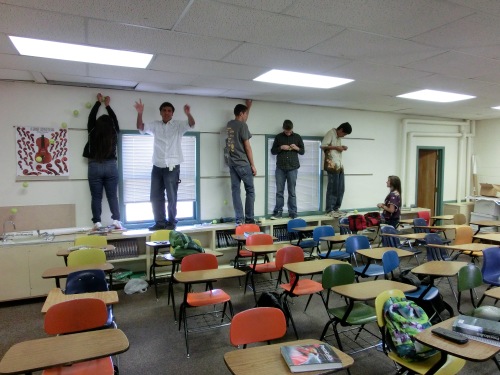 A convenient ledge to stand upon. 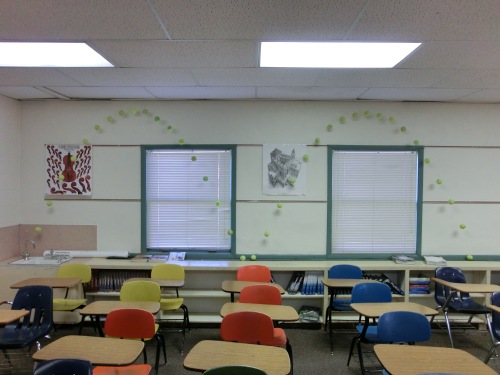 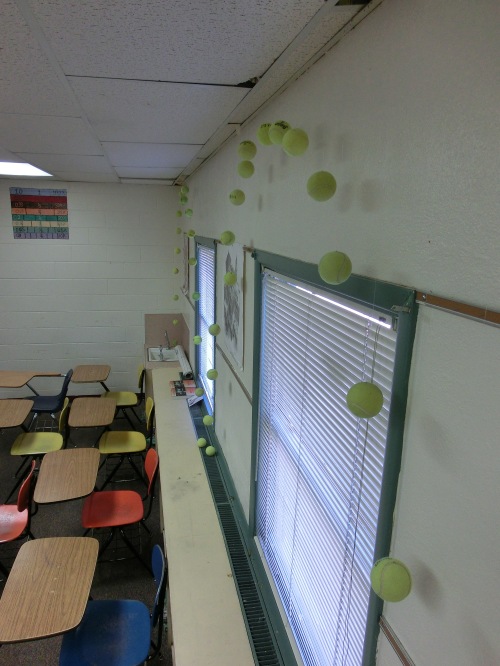 You might notice the center of the “bounce” has two adjacent balls instead of a single ball.  The mathematical model was supposed to be a single ball, but the student who began the 2nd parabola measured on the floor instead of the ceiling, and so the second parabola began a little to the right.

Oh, the last cool thing about this was that the students decided on their own to space the tennis balls 15 cm apart horizontally.  When we “opened up” the ceiling and looked, there were little holes to run the fishing wire through that were spaced exactly 15 cm apart!  Some would call that lucky, but at our school, we say it’s providential.  Although now I know for next year how far apart to tell the students to have the tennis balls…