Getting students to have a Growth Mindset is something that I’ve been working on and improving every year I’ve taught. This year I had a discussion about it later in the year than I should (at the end of the 1st quarter), but it was still a very valuable discussion.

I started by giving them a Google Form with this question:

How does math work?

I only gave them two possible answers:

People are born with math skills or aren’t. How good you are at math mostly depends on that.

People who work hard in math class can get better at doing math. How good you are at math mostly depends on that.

I intentionally left off the “something in between” answer even though many students immediately complained they thought it was a combination of both. I wanted to see which they thought was more important. The results surprised me:

They surprised me because I thought a vast majority would vote for “people are born with math skills.” Perhaps my students are starting to believe the opposite of that simply because of the way my class works and the classroom culture I try to cultivate, despite not having an overt discussion on this topic before now? [1]

Me: Well it did affect it, significantly. Like, the students who had the Growth Mindset did way, way better, on average, than those with the Fixed Mindset. [2]

I asked for a little input on why people voted for the one they did, and some students spoke up. I confessed to them that I used to have a Fixed Mindset, well into college. And I told them about a student from a few years ago, who they mostly knew, who made the comment at her senior presentation “I didn’t think I was that good a student.” I explained that I could believe that because early on in her junior year, she didn’t really “stand out” from others beyond the fact that she worked really, really hard.

She’s the only student in the history of our school to get into the BA/MD program.[3]

I then showed them this cool diagram and we talked about how changing their mindset: 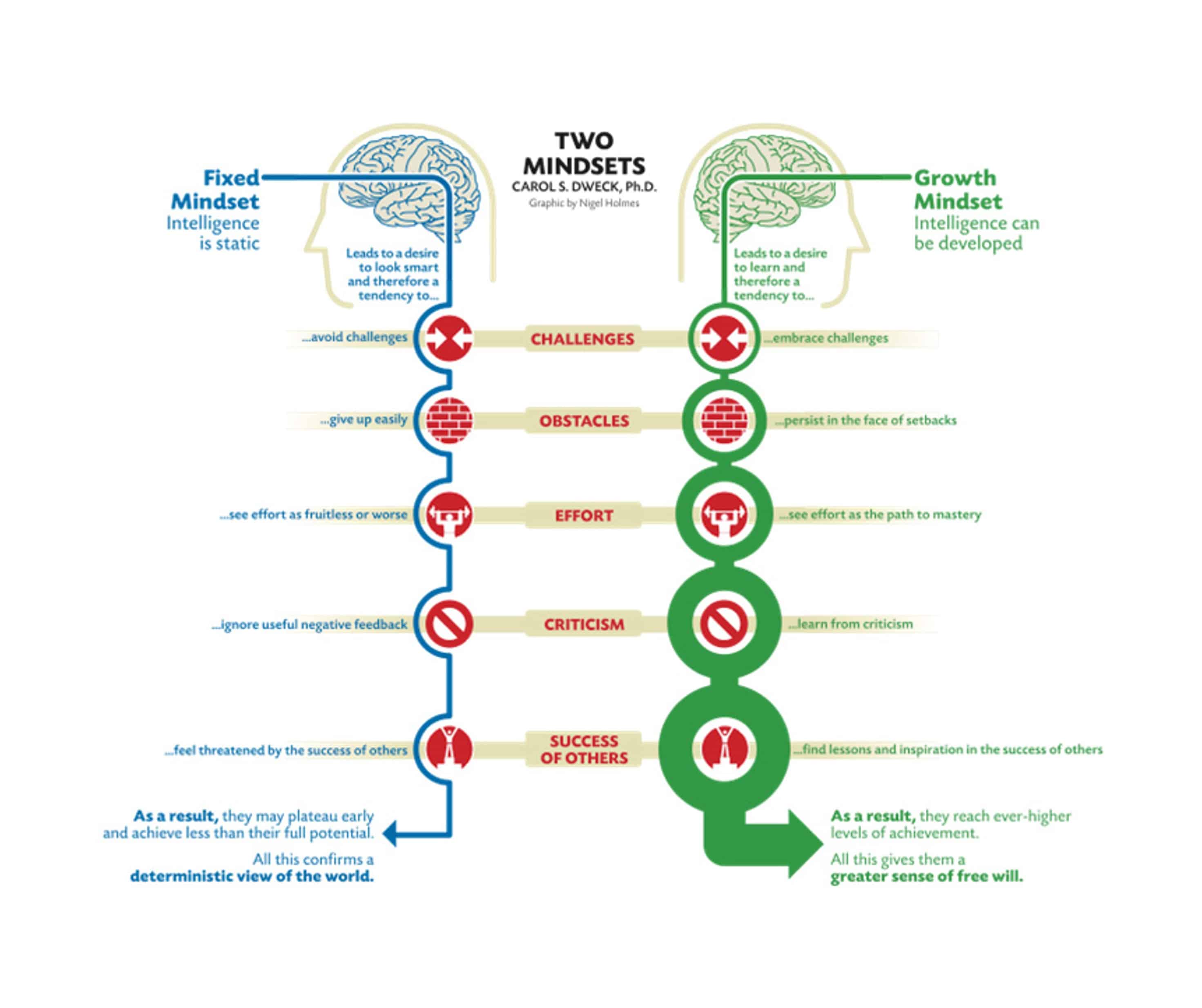 I’m really glad we had this discussion, even if it was a bit late in the year. It was one of those times in the classroom where I could almost feel the students grabbing at the inspiration with their eyes and wanting to be better students and people because of the discussion. Or maybe that’s just all in my mind. Either way, the one thing I need to get better at is mentioning this discussion more often in the future whenever a student is bummed about a grade, frustrated with a problem, or envious of another’s success.

Already a few students have started coming in much more often to demonstrate standards. Wohoo.

[2] I can’t quote this study, but I’ve heard it before. If you know of the study, please leave it in the comments below so I can show my students!

[3] It’s a program at UNM (several school have it) where you receive admission to medical school prior to entering undergrad. Needless to say, it’s a very competitive application into the program.

I tried something new this year when teaching function transformations: I had students come up with the “rules” in groups with little help from me.

Students created a DesMan (person using Desmos) and built up an intuition for how functions move[1]. We spent a block day (1.5 hours) doing this. Students were free to share what they discovered with one another and that helped tremendously. Here are some of their creations: 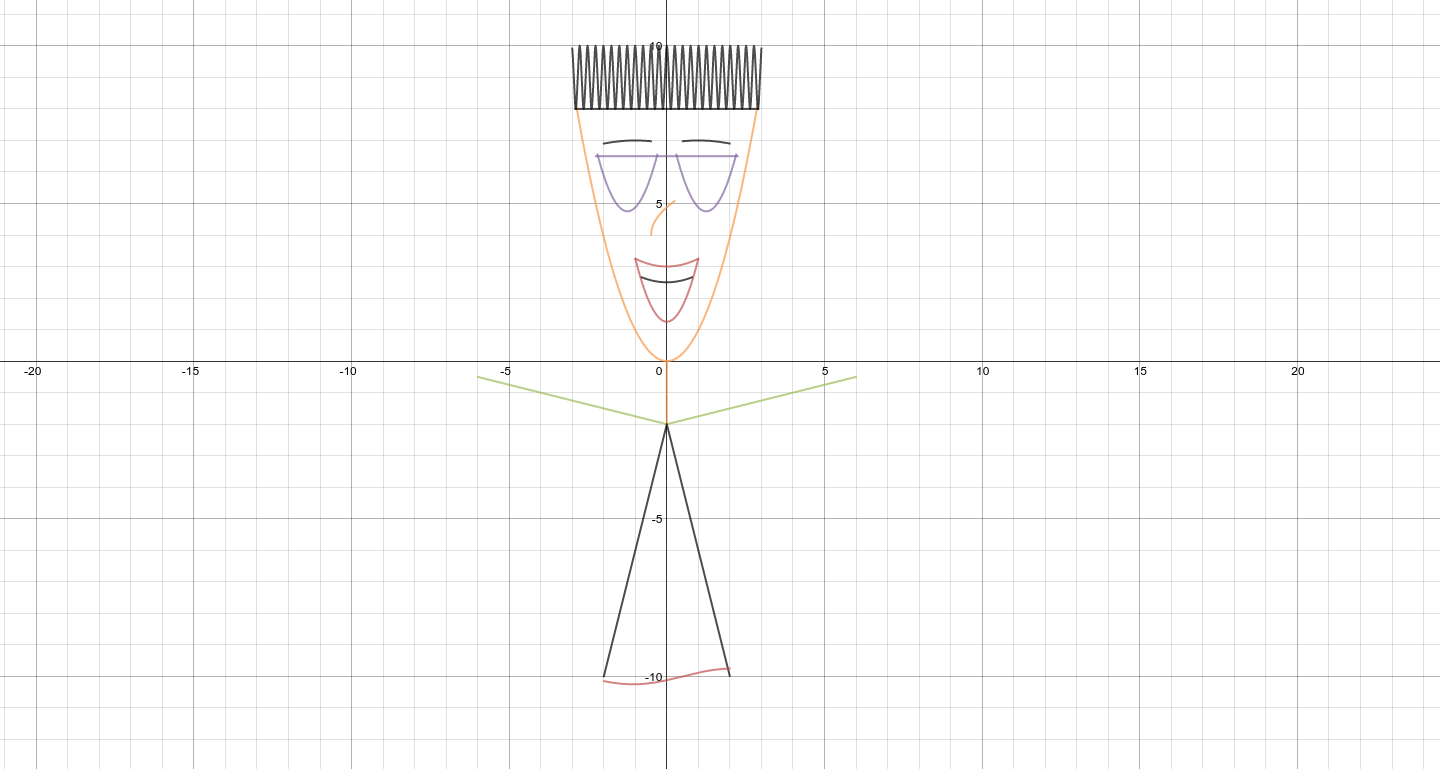 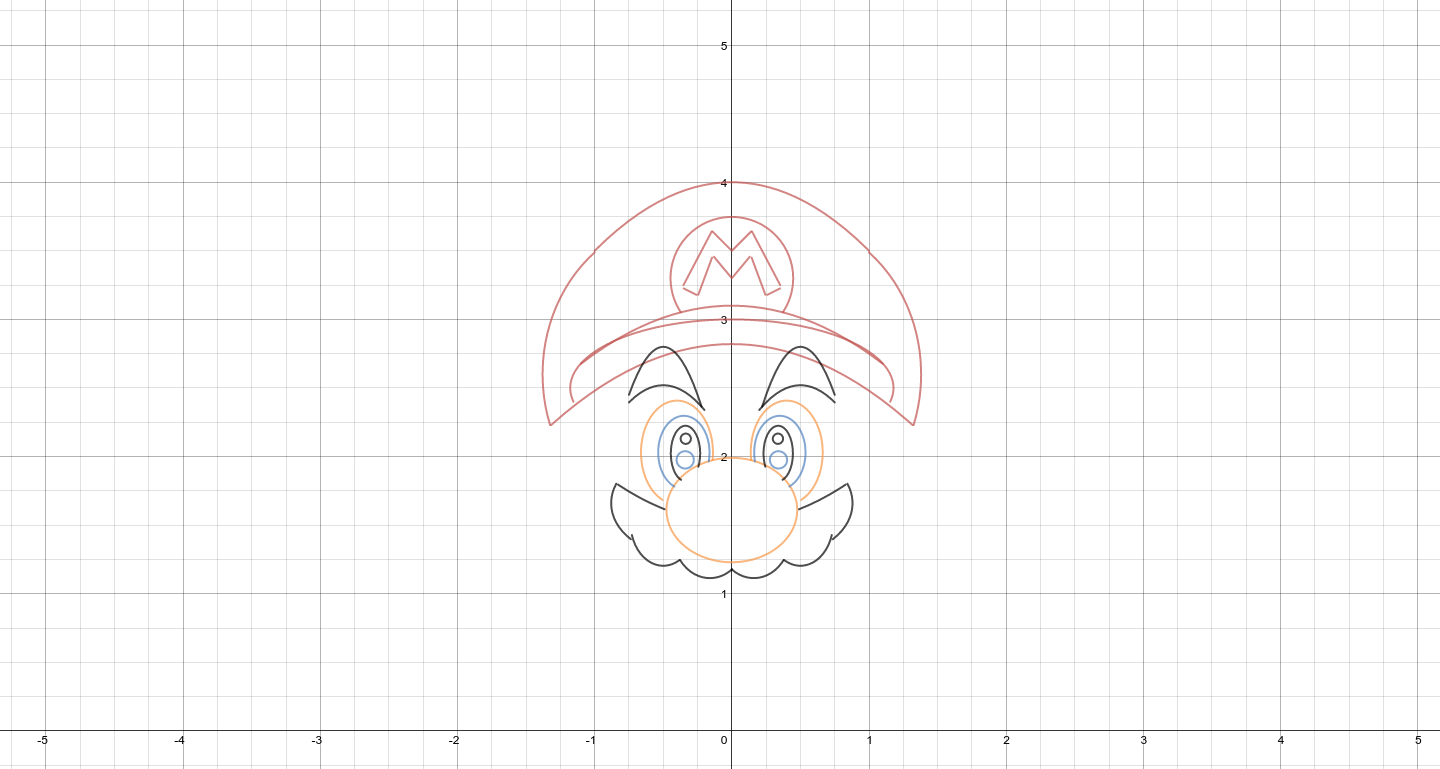 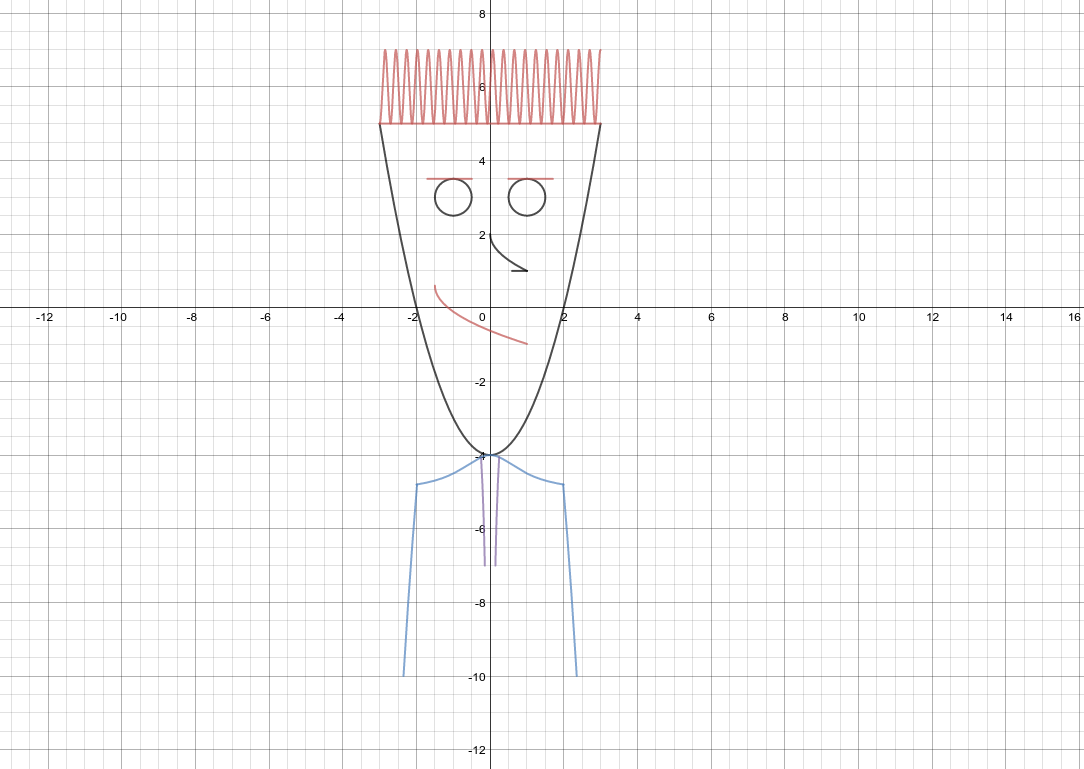 And here’s one that has moving parts:

No students finished the DesMan on the first day, but I told them that they could get credit for “Modeling with Math” if they finish it.

We split into random groups of three and I had them move to their vertical whiteboards with these instructions:

Here are some of the whiteboards they created. 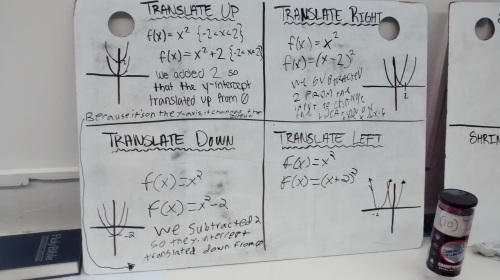 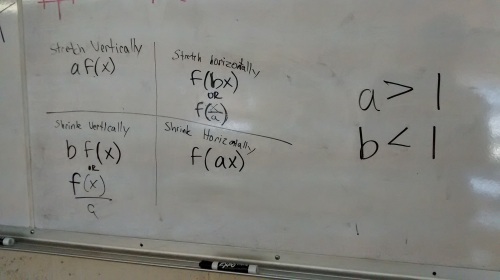 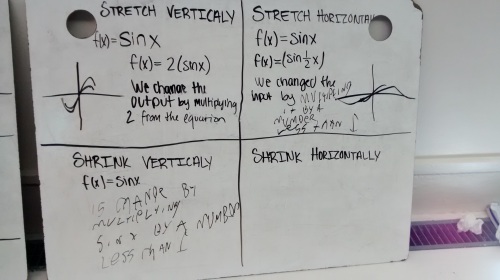 Even though their whiteboards are great, that wasn’t the best part of the activity. The best part was the discussions that I overheard. Every student was involved because every student (a) had some experience with all of this through their work on the DesMan and (b) felt comfortable asking “why?”. I felt as though we had reached a classroom culture of safe inquiry and curiosity, where “why does that work?” questions are empowering rather than embarrassing.

It also helped tremendously having Desmos as an outlet

Some groups finished this part before the end of class, so I had them examine vertical and horizontal reflections. Here’s their work:

Or maybe I drew those pictures in red, I forget.

We did a short game of “guess the type of function transformation from the graph”. It helps having 2 screens: one that I only I can see, which I use to edit Desmos and the other that the class sees, when the function is hidden.[3]

In three short days, I feel confident that students will be able to use these transformations the rest of the year[4]. It’s important to note that I’m not introducing this to students the first time (it is Precalculus and they should have seen this at least once in Alg II), though they often act as though they haven’t seen it before.

[1] I didn’t use this Desmos page, but it’s another way to do this: https://teacher.desmos.com/desman. I just had them graph a parabola, restrict the domain {-3<x<3}, then move it and they were off!

[2] This is where the vertical whiteboards was tremendous: I could catch groups right as they got to finishing their work.

[3] I only have this setup in one of my classrooms. In the other I have to use the “freeze” button on the projector to work out the next graph.

[4] And they will use them them since I like 3-act lessons where students have to figure out what the function is. It’s important that they practice this throughout the year.  Maybe one day I’ll show them how to approximate data using the tilde (~) in Desmos.